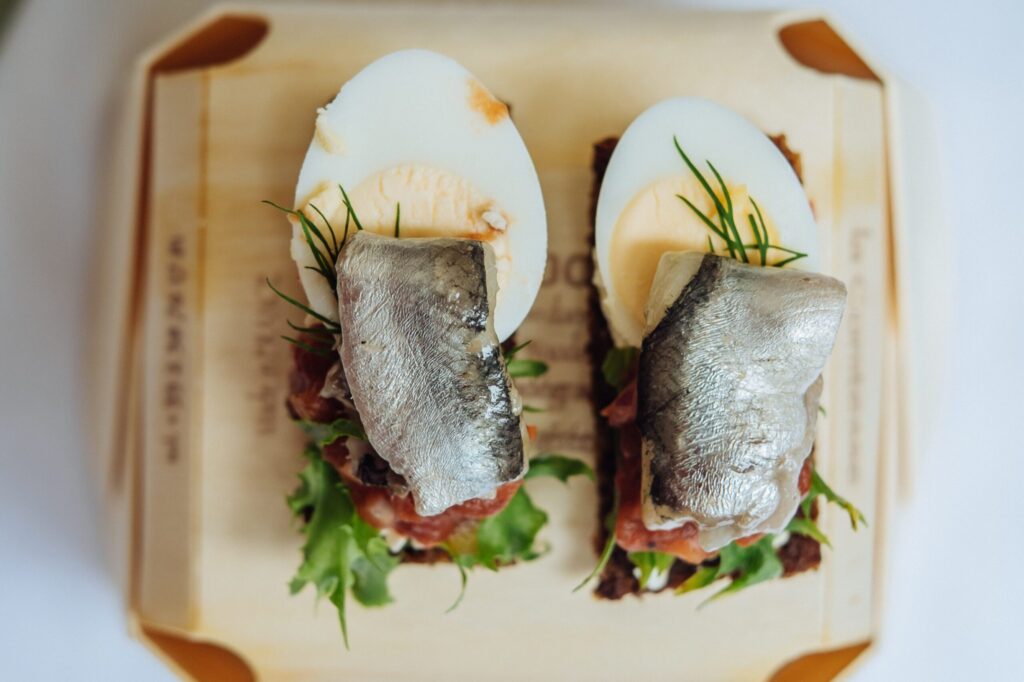 The Baltic States are not famous for their food like Italy, Japan, China or other gastronomic countries are, but they surely have their own unique cuisine and eating habits. We believe that one of the best things to do when you visit a new country is to taste the local food. Eat where the locals eat and try at least one traditional dish specific to the country or region. If this is something you also appreciate while travelling then you might be wondering what Baltic food is and what you should try on your trip to the region.

What is Baltic Food?

The region has been invaded and occupied by multiple forces over time, and this has left a big impact on the cuisine and eating habits. The food has mostly been influenced by Russian and German cuisines but there’s also an increasing inspiration drawn from the Scandinavian cuisine. Baltic people have always been close to nature, and using the fruits of nature as much as one can is important – wild berries, mushrooms, fish and game are all popular in Baltic dishes. Seasonal food and everything local, fresh and pure are the keywords used when describing Baltic food.

Here are some must-try dishes you can’t miss on a trip to the Baltic States. 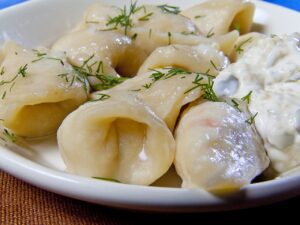 Nearly every cuisine in the world has some form of dumpling – Polish pierogi, Chinese wonton, Italian ravioli, Japanese gyōza and in the Baltics it’s called Pelmeni, originally a Russian dish. The dough is usually filled with minced meat (mainly pork or beef), cheese or mushrooms and is usually served with sour cream and dill for seasoning. The store-bought varieties are cheap and easy to make. A perfect comfort food! If you’d like to try them in a restaurant, go to Restaurant Moon in Tallinn or XL Pelmeni in Riga which is a great budget option. In Lithuania, they also have famous dumplings called Cepelinai (Zeppelins) which are potato dumplings stuffed with spiced ground meat. Usually, the dumplings are served with bacon, pork rinds and sour cream and milk-based sauce. Try the Zeppelins at Etno Dvaras in Vilnius. 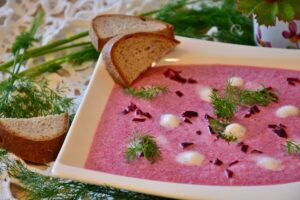 The beetroot soup can be eaten either cold or hot. The cold version is particularly popular in Lithuania and is called Šaltibarščiai. in Latvia, it’s called Aukstā zupa. It is made of beetroots, kefir or buttermilk and grated cucumbers and hard-boiled eggs. Of course, like many other dishes in the Baltics, it’s seasoned with dill. In Estonia, the hot version (Borsch) is a popular soup. It’s usually made of various vegetables (including beetroot of course) and sometimes meat. It’s usually served with sour cream and dill on top. Try the Šaltibarščiai at Stora Antis in Klaipeda. 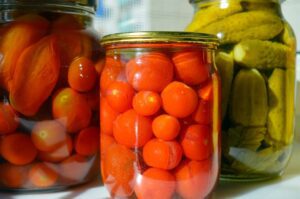 People in the Baltic States love pickles and pickling different foods is a bit of a fun hobby in the region. It’s possible to pickle different vegetables such as cucumbers, beetroots, cabbage, tomatoes and pumpkins and of course mushrooms and even fish. You can find a large variety of pickles in every market, supermarket and at people’s homes. 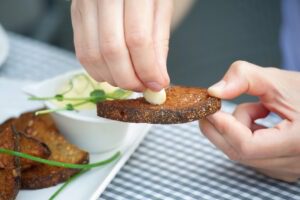 This is not the typical garlic bread you might think of when you read it on the menu. The garlic bread in the Baltics is made of rye bread tossed in or rubbed with garlic. You can say that rye bread is a dietary staple and a symbol of cultural identity in the Baltic region. In Estonia, the bread is so important that there is even a day called Estonian bread day, dedicated to the bread. Garlic bread is a perfect beer snack to wash down the tasty craft beers popular in the region. Try the garlic bread at Folkklubs ALA Pagrabs in Riga. 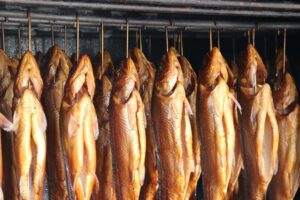 As all Baltic countries have great access to the Baltic Sea, eating fish in any form is a given. Smoked fish is definitely one of the more unique and special products, having centuries-long traditions. The most popular fish to be smoked are Baltic herring, cod, salmon, vendace, bream and plaice. You can taste freshly smoked fish in the roadside stalls or local markets in the charming coastal villages. If you’d like to see the fish smoking in progress, visit Jurmala Open Air Museum on Thursdays during summer. You will see the local fishermen show and talk about the traditional ways to smoke fish, and you can try it yourself later. 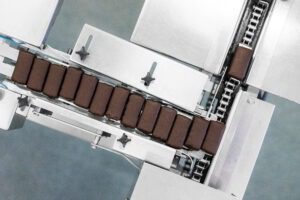 Chocolate or caramel-covered sweet curd roll. There are multiple options of the sweet snack and it can be either plain flavoured or filled with different things such as berries, chocolate or coconut. You can buy them in any grocery store and because they are packed individually, they are a great grab-and-go snack. 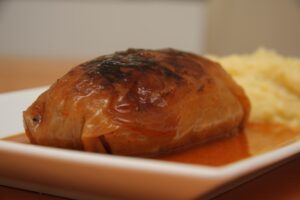 Another global dish that is eaten around the world. It consists of cooked cabbage leaves wrapped around different fillings and then cooked in different sauces. You can stuff the cabbage leaves with meat or just do a vegetarian option instead. Try them at Senoji Trobele in Vilnius. 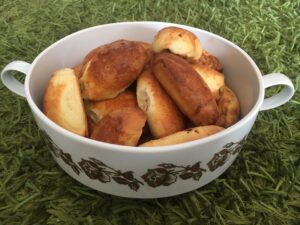 All three Baltic states love their pies and are very proud of them. They can be sweet and savoury and filled with different ingredients. The small pies are a great snack and can be easily eaten while walking around or packed for a nice picnic. The traditional Lithuanian pie Kibinai is particularly popular with the Karaim ethnic minority and associated with the city of Trakai. This is definitely a must-try pie when you visit Lithuania and especially Trakai. Try it out at Senoji Kibininė.  In Latvia, one of the most traditional and unique pies is Sklandrausis. It’s made from rye pastry which is then filled with a mixture of carrots and potatoes. Try it out every Sunday in Riga at the Kalnciema Street Market. In Estonia, rhubarb is especially popular and is used in many pie recipes. You can find different pie varieties in most cafes during spring/early summertime when rhubarbs are in season. 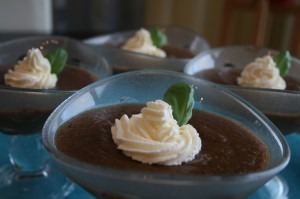 We are back to rye bread and its importance in the lives of the Baltic people. Even dessert can be made out of this much-loved bread. Bread soup is a dessert made of soggy rye bread by pressing through a sieve and then combining with different spices, sugar and dried or fresh fruits and nuts. To finish it off, a generous serving of whipped cream is placed on top of the dessert. 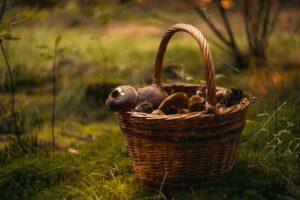 Foraging is definitely a favourite pastime of the locals in the Baltic States. You can find people wandering around the forest most of the year trying to find different products to pick and eat. In spring you can find people collecting birch sap and picking wild garlic. When summer hits, the wild berry season starts and lasts till late autumn. Berries are great in desserts such as cakes, puddings, jellies and beverages. Autumn is also the time when you can find a lot of edible mushrooms. This is the time when all roadsides in the forest are filled with parked cars and everyone is walking around the forest with baskets, trying to fill them up. Everyone has a secret spot, which has been passed down from generation to generation. It’s no surprise some ex-pats in Tallinn call mushroom picking a national sport of Estonia. Mushrooms are great in meat dishes, salads, pies, sauces and can be marinated, salted, dried and so on. Baltic forests are also a great source of different meats. If you have never tried wild game, then this is your chance. Eating wild game is a big part of the Baltic cuisine and the most popular animals are moose, deer, rabbits, boar and different birds. To try wild game head to Lokys in Vilnius.

We use cookies on our website to give you the most relevant experience by remembering your preferences and repeat visits. By clicking “Accept All”, you consent to the use of ALL the cookies. However, you may visit "Cookie Settings" to provide a controlled consent. Read More
Cookie SettingsAccept All
Manage consent

This website uses cookies to improve your experience while you navigate through the website. Out of these, the cookies that are categorized as necessary are stored on your browser as they are essential for the working of basic functionalities of the website. We also use third-party cookies that help us analyze and understand how you use this website. These cookies will be stored in your browser only with your consent. You also have the option to opt-out of these cookies. But opting out of some of these cookies may affect your browsing experience.
Necessary Always Enabled
Necessary cookies are absolutely essential for the website to function properly. These cookies ensure basic functionalities and security features of the website, anonymously.
Functional
Functional cookies help to perform certain functionalities like sharing the content of the website on social media platforms, collect feedbacks, and other third-party features.
Performance
Performance cookies are used to understand and analyze the key performance indexes of the website which helps in delivering a better user experience for the visitors.
Analytics
Analytical cookies are used to understand how visitors interact with the website. These cookies help provide information on metrics the number of visitors, bounce rate, traffic source, etc.
Advertisement
Advertisement cookies are used to provide visitors with relevant ads and marketing campaigns. These cookies track visitors across websites and collect information to provide customized ads.
Others
Other uncategorized cookies are those that are being analyzed and have not been classified into a category as yet.
SAVE & ACCEPT